More than two thirds of the unplanned downtime of reciprocating compressors can be attributed to issues with the wearing components in a cylinder. Early identification of these issues combined with a reliable quantification of the level risk and impact on production and/or power consumption allows for proactive scheduling of maintenance. This may mean stretching out the runtime despite rising discharge temperatures in order to align the work with a prescheduled maintenance interval or changing out components earlier to avoid future unscheduled downtime oil field assets.

What is Blowby for Gas Compression?

“Blowby” is a term used by Detechtion Technologies to quantify inefficiencies in the compression process. Blowby is an indication of the health and efficiency of the valves and piston rings inside every cylinder. In short, it is a measure of the number of molecules of gas that are being re-circulated and recompressed within a cylinder. As more gas is re-circulated and recompressed, the temperature rise across the cylinder increases, more horsepower is required and the cylinder’s capacity to compress gas decreases.

The Operations personnel in an oil and gas company play a vital role when it comes to monitoring and maintaining the compressors. Blowby is not meant to replace the diligent efforts of these team members. Instead, Blowby should support observations made in the field. Changing operating conditions, gas flows and ambient temperatures will all result in variations in the pressures and temperatures of a compressor. However, when changes are observed along with an increase in the calculated Blowby, it provides easy justification for further investigation. Whereas a constant level of Blowby should give confidence that the variance is within the normal range for the compressor.

Through our experience, we at Detechtion have developed guidelines that relate blowby to what can be seen within the compressor:

At less than 10% blowby, it is usually going to be very difficult to identify a single valve as being damaged. However, it is possible to determine when it is cost effective to shut down a unit and examine/replace valves  by taking into consideration the trends over a number of reports and the reported flow in relation to the maximum flow (from the compressor curve).

Some of the most probably causes are:

The causes will be discussed in more detail in future E-Tips.

Blowby is a thermodynamic calculation on each cylinder, which includes the geometric configuration, gas analysis and operating conditions (pressures, temperatures and speed). 0% blowby is essentially adiabatic compression, meaning that there is no heat transferred to the surroundings. Although we know that this is impossible since the compressor’s cylinders radiate heat. However, once the compressor is warmed up and operating at steady state, it is assumed that the heat lost to the surroundings is minimal for each compression stroke. It also provides a reliable reference point and is commonly used in compression calculations.

Therefore, any level of blowby above 0% indicates that the temperature rise for the associated compression ratio is higher than that of adiabatic compression. From this definition, small percentages of blowby are normal and expected. However, large levels of blowby indicate an inefficiency in the cylinder. Although the calculation is thermodynamic, at levels <20% it can be used to directly estimate the amount of gas that is being recompressed or, in the case of later compression stages, estimate the increase in interstage pressure. 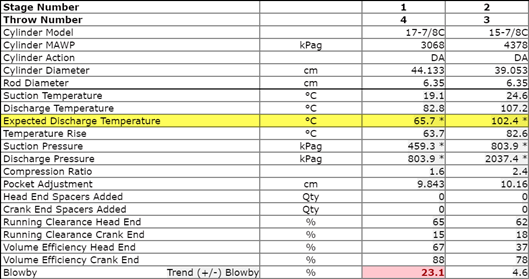