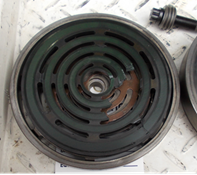 As mentioned in the last E-Tip, “Blowby” is a term used by Detechtion Technologies to quantify inefficiencies in the compression process. Blowby is an indication of the health and efficiency of the valves and piston rings inside every cylinder. In short, it is a measure of the number of molecules of gas that are being re-circulated and recompressed within a cylinder. As more gas is re-circulated and recompressed, the temperature rise across the cylinder increases, more horsepower is required and the cylinder’s capacity to compress gas decreases.

There are several things that can result in Blowby to flag on an Enalysis report. This article focuses on the effect of damaged cylinder wear components. While the most common culprits are valves and piston rings, this also includes piston rod packing, VVCP seals, valve gaskets, etc. Essentially, any component that is meant to prevent the passage of gas under normal working conditions, could lead to Blowby when it becomes damaged. 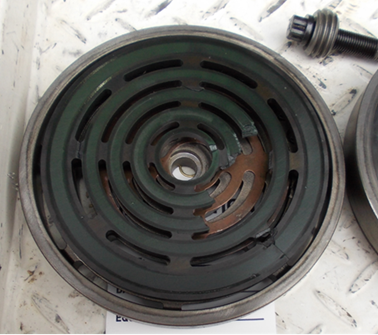 The images below show the effects of a damaged suction valve. On the discharge stroke, partially compressed gas can slip pass the damaged crank-end suction valve. This hot gas is then brought back into the cylinder on the next suction stroke. 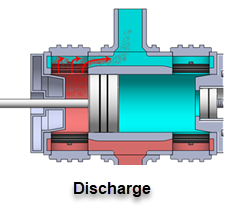 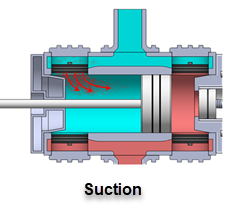 The recirculated gas causes excess heat to be generated and reduces the capacity of the cylinder. As a result, Blowby will increase on the Enalysis report. 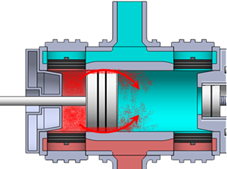 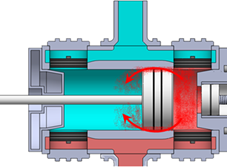 Blowby from other Damage

Blowby can also be calculated due to damage of components other than the valves and piston rings. Damage to the following components can also cause blowby to calculate on the Enalysis report:

The following two image show a valve gasket that was damaged during installation. This resulted in gas leaking and blowby being calculated despite no damage to the internal valve components.

When Blowby flags on an Enalysis report, the following troubleshooting steps can be helpful:

The following points can be valuable to consider when replacing damaged components:

Through our experience, we at Detechtion have developed guidelines that relate blowby to what can be seen within the compressor:

At less than 10% blowby, it is usually going to be very difficult to identify a single valve as being damaged. However, it is possible to determine when it is cost effective to shut down a unit and examine/replace valves  by taking into consideration the trends over a number of reports and the reported flow in relation to the maximum flow (from the compressor curve).

There are many factors that can contribute to either blowby or gauge maintenance on an Enalysis report. Other than component damage, some of the most common are: