In this E-Tip, the second in our Compression Basics series, we will explore some basic gas properties to see how gases respond to changes in pressure and temperature and what that means for the amount of gas that can fit in our compressor at suction conditions.

Natural gas is the result of decomposed organic matter and is a mixture of hydrocarbon gases and various impurities. It is composed of light weight hydrocarbon elements ranging from methane (CH4) to octane (C8H18). In addition to these hydrocarbon elements, natural gas can also contain various amounts of carbon dioxide (CO2), Nitrogen (N2), hydrogen sulphide (H2S) or Helium (He).

Before trying to understand gas compressor design and operation, it is important to first have a working knowledge of basic gas behaviour. All gases behave essentially the same with respect to changes in pressure, temperature and volume. These relationships between pressure, temperature and volume are known as the fundamental laws of gas behaviour. However, before we examine these Gas Laws, there are a few concepts that are important to understand.

Gauge pressure plus atmospheric pressure is Absolute Pressure and it is abbreviated kPaa.

Absolute zero is the temperature at which all molecular motion ceases – minus 273.15°C. The unit for absolute temperature is Kelvin (K) and is the reading of the thermometer in degrees Celsius plus 273.15°C.

All compressor calculations are performed in absolute units of pressure and temperature.

In compression, we are interested in the relationship between Volume, Pressure, and Temperature of natural gas and we can use Thermodynamics to understand these relationships. These principles are called the Gas Laws.

During the seventeenth century, Robert Boyle observed that if the temperature of a gas remains constant, its volume varies inversely with the absolute pressure. In other words, reducing volume increased the pressure.

Boyle’s and Charles’ laws can be combined to form the combined gas law. This fundamental law is one of the most widely used relations in gas measurement work. It approximates the behavior of many gases under conditions close to ordinary atmospheric temperatures and pressures. At low pressures, most gases behave like an ideal gas and follow the ideal gas laws quite closely.

When gas pressure increases, a wide variation between ideal and actual gas behavior may occur. The deviation of a gas from the ideal gas laws is known as the compressibility factor and is commonly designated with the symbol ‘Z’. Compressibility is a function of temperature, pressure and the nature of the gas, and is experimentally derived from data of the actual behavior of a particular gas under pressure, volume and temperature changes. The ‘Z’ factor is used as a multiplier to adjust the ideal gas law to fit actual gas behavior.

Avogadro’s law states that “equal volumes of all gases, at the same temperature and pressure, have the same number of molecules". It provides the basis to calculate the number of constituent particles of gas in a sample. Multiplied by the Boltzmann constant, Avogadro’s Number becomes the Universal Gas Constant, R. When combined with the Basic Gas Law, the gas constant allows us to calculate how much gas, or how many moles of gas, exist in a volume.

Shown below is the Ideal Gas Law with Compressibility and the Universal Gas Constant, which can be used to quantify the number of molecules of a known gas composition that can fit into a defined volume, VS, under known conditions, PS and TS. 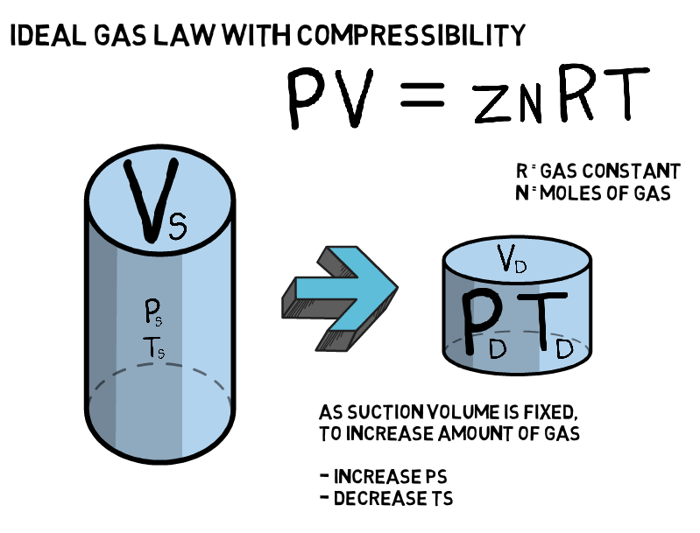 If, for now, we imagine a compressor to be a known fixed volume, such as Vs in the image above, we can use the underlying fundamentals of the ideal gas law to explain some key features of a compressor performance curve.

As the compressibility factor, Z, is essentially constant for permissible compressor suction conditions, R is constant and Vs is fixed, we can simplify the ideal gas law above to:

The above equations tell us that the amount of gas, n, is proportional to the suction pressure, Ps, and inverse of the suction temperature, Ts.

The fundamental gas laws explain why compressor capacity increases with increasing suction pressure. In reality, this relationship is not perfectly linear. This will be explained in more detail later in this Compression Basics E-Tips series.

In the next E-Tip in this series, we will look at the role compression plays in natural gas production. Click here to read E-Tip 1.18 now!

Detechtion Technologies is the market leading asset optimization provider in Upstream Oil & Gas saving our customers millions of dollars per year in expenses by enabling them to operate more efficiently, as well as operating more safely and environmentally. Detechtion leads the digital transformation and optimization of natural gas compression, oilfield chemicals, and other production operations with Asset Performance Management (APM), Industrial Internet of Things (IIoT) and Mobile solutions. Since 1999, thousands of users have depended on Detechtion Technologies to optimize over 10,000 assets worldwide.