Compressor safety shutdown systems consist of pressure, temperature and vibration sensors combined with a set of annunciators and switches. Alarm and shutdown triggers are applied to critical sensors to prevent operating under any conditions that would exceed compressor rated limits. Alarms provide a warning to an operator that a limit is being approached, while triggering a shutdown will immediately cease the operation of the compressor.

Requirements of these shutdowns, alarms, annunciators and switches are standardized by ISO13631/API11P. Although the requirement laid out in the standards are specific, the application is quite general. Relevant excerpts of the ISO1361 standards are provided below.

The systems may function hydraulically, pneumatically, electrically or in any combination, as specified by the purchaser.

Unless otherwise agreed, for every shutdown function an alarm function shall be provided and set at a value which represents a deviation from the normal condition and less than the setting of the shutdown. Additional alarms, not associated with shutdowns, shall be provided as specified.

14.2 Minimum required shutdowns
The conditions at which shutdown is required, as a minimum, are specified in Table 7. 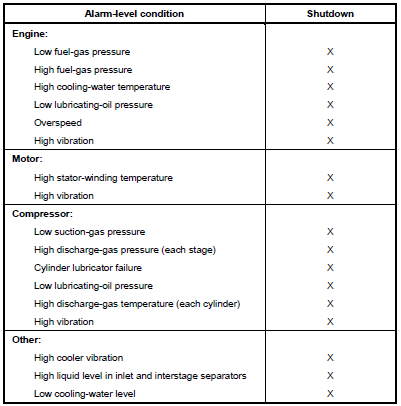 14.3 Additional alarms and shutdowns
The extent to which the alarm and shutdown systems shall be supplied by the vendor shall be specified by the purchaser on the data sheets.

14.4 Annunciators
Each component which actuates an alarm or a shutdown shall also actuate an annunciating device which indicates first-out cause of alarm or shutdown. Annunciators shall be bypassed only for the purpose of a preset-time lock-out for use on certain shutdown devices during start-up and manual testing. The vendor shall specify the type and size of annunciator, the shutdowns and alarms to be annunciated, the number of spare points on the annunciator panel and the type of warning (audible or flashing light or both) for alarms and shutdowns.

The protection of any compressor meeting the minimum requirement for safety shutdowns, as specified by ISO13631/API11P, depends on the static shutdown trip settings on the following monitored process parameters:

A safety shutdown system consisting of only the minimum shutdowns requires the low (Stage 1) suction-gas pressure and high discharge-gas pressures (each stage) to be set to protect the compressor from exceeding all compressor limitations, other than maximum allowable temperature, previous described. Therefore, these settings will often be conservative for normal operating conditions, thus restricting the permissible operating range. For example, a compressor that normally discharges into a pipeline at 8000kPag may not reach rod load limits until the inlet suction pressure has declined to 300kPag. However, the low suction-gas pressure may be limited to only 800kPag, as rod load limits would be reach at this pressure at the pipeline’s maximum operating pressure of 10,000kPag.

A diagram of a basic safety shutdown and alarm system is shown below. 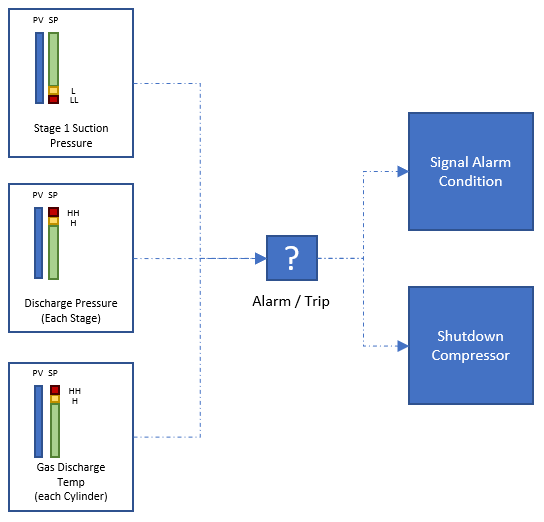 The limitations to the operating range can be reduced by adding alarm and shutdown settings on the following monitored process parameters:

Shutdowns on these process variables provide increased protection against high rod loads and low volumetric efficiency. This permits a greater overall compression ratio between the low (Stage 1) suction-gas pressure and the High discharge-gas pressure shutdowns, as the focus of these shutdowns shifts towards material limits of the components, such as MAWP. This results in an increase to the permissible operating range of the compressor under most scenarios.

A diagram of a standard safety shutdown and alarm system is shown below.

There are two common philosophies for setting the high discharge-gas temperature trip point for each cylinder:

While the latter philosophy provides superior protection, the former will result in a broader operating range and a reduction in compressor trips. The correct philosophy for any compressor will depend on the instrumentation and communication systems present and the type and extent of condition monitoring conducted.

Whereas alarms are set at a margin to each shutdown trip point, control points are set at a margin from the first acting shutdown trip point. For example, if declining suction pressure will result in high discharge temperature before any other limit is reached, then the low control point will be set at a pressure to prevent the maximum rated discharge temperature being exceeded. Reaching a control point will modulate the suction control or recycle valve or, in some instances, reduce the driver speed. The function of these two valves, combined with variation in driver speed, is to maintain an operating range within that defined by the safety shutdown shutdowns.

The suction control valve regulates rising suction pressure with increasing flowrates and primarily serves to protect against driver power limits and high Stage 1 rod loads. The recycle valve maintains suction pressure with declining flowrates and primarily protects against rising discharge temperature, high rod loads and low volumetric efficiencies. Reduction in the driver RPM serves to reduce compressor capacity in order to prevent further declines in suction pressure or increases in discharge pressure due to excessive pipeline packing. A standard configuration of a suction control and recycle valve is shown in the schematic below.

The control points should be treated as the primary defense of a compressor against an upset in process or machine conditions. If the controller is unable to respond to the process upset, an alarm follows and alerts of an approaching limit. Should the upset worsen, the final defense of the compressor is the safety shutdown trip.

The following two diagrams illustrate a traditional capacity control approach for both the suction control and recycle valves.

The control loop shown in this flow diagram aims to maintain a predetermined minimum suction pressure despite declining upstream deliverability or to reduce compressor throughput to limit increases in discharge pressure caused by excessive line packing. In order to minimize fuel gas or electricity usage, the primary response is a reduction in driver speed. If the driver speed is reduced to the minimum rated speed, the secondary response is to open the recycle valve. If the control value results in the driver operating at minimum RPM and the recycle valve fully open, then the control system may be unable to prevent a shutdown condition being reached and tripping the compressor.

The high suction pressure control setpoint is set to protect against overloading the driver and from exceed Stage 1 rod loads. If the setpoint is reached, the controller will send a signal to the suction control valve to close. This will limit the capacity of the compressor and prevent further increases in the Stage 1 suction pressure.

The next Enalysis Tip will cover Detechtion Technologies’ recommended procedure for determining the shutdown and alarm settings, as well as set points for the recycle and suction control valves. Click here to read it now.

Detechtion Technologies is the market leading asset optimization provider in Upstream Oil & Gas saving our customers millions of dollars per year in expenses by enabling them to operate more efficiently, as well as operating more safely and environmentally. Detechtion leads the digital transformation and optimization of natural gas compression, oilfield chemicals, and other production operations with Asset Performance Management (APM), Industrial Internet of Things (IIoT) and Mobile solutions. Since 1999, thousands of users have depended on Detechtion Technologies to optimize over 10,000 assets worldwide.