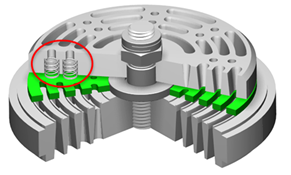 Blowby can result without any physical damage to wear components or unaccounted pressure drops. Improper valve springing can lead to valve flutter, allowing gas to recirculate each compression cycle. Alternatively, high rates of lubrication can lead to oil coating the valve plate and seat, which leads to an increase in pressure differential required to break the stiction when the two surfaces separate. Both are examples of inefficiencies in the compression process and can cause Blowby to flag on an Enalysis report. 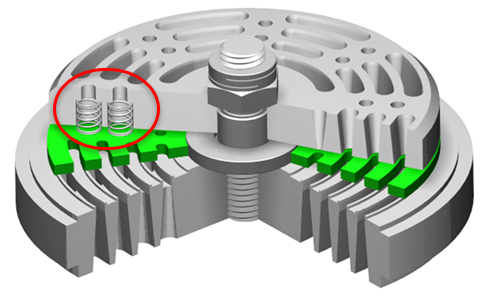 Valves require a pressure differential resulting in a force on the valve plate against the valve springs to open a passage for gas to flow into or out of the cylinder. Without a difference in pressure, the spring force pushes the plate against the valve seat and no gas can flow. If the spring force is too great, then the pressure differential to open the valve can be significant compared to the total compression ratio of the stage. Low compression ratios may be inadequate to fully open the valves if the valves are not sprung correctly. This can lead to valve flutter. Although not damaged, fluttering valves behave like damage and allow gas to slip by the valves when they are supposed to be sealing. This consumes excess engine power and decreases compressor capacity. As well, excess heat is generated, which leads to Blowby on an Enalysis report.

When valves are resulting in high blowby at low compression ratios, working with your valve supplier to optimize the valves for the conditions can result in improved valve performance, leading to a drop in power consumption, an increase in capacity, and/or a drop in suction pressure. 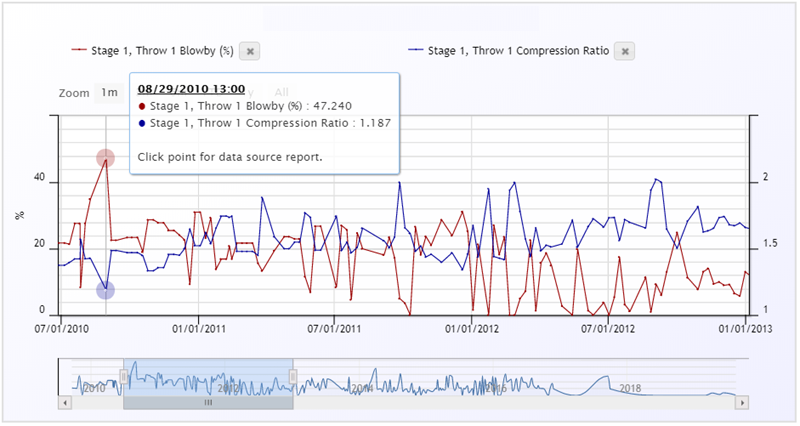 If the Blowby trend shows consistent high levels of Blowby, it is possible that the cylinder lubrication rates are too high. This is most common in newer compressors or compressor that have recent undergone a major overhaul. Most manufacturers recommend a break-in period with increased lubrication rates. Break-in rates can be 150% to 200% higher than normal rates and are often recommended for the first 200 hours of operation. The higher lube rate helps cool components and flush away any debris from the assembly/overhaul. If the lube rates are not adjusted after the first service, the oil consumption will be high, which is costly, but it can also contribute to excess power consumption. 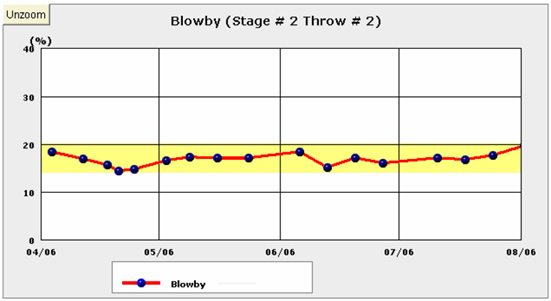 Excessive lubrication usually presents as relatively constant high blowby and, most often, on multiple cylinders. This is because it is uncommon to have a force feed lubrication system feeding a single cylinder. It is likely that the system feeds one side or all cylinders of the compressor.

As a quick check, Ariel Corp has published the “Cylinder Lubrication Paper Test” as a viable field inspection method: