How Does Opening 1st Stage Pockets Allow Me To Move More Gas?

By Darnell Franco January 30, 2019 Enalysis, Thought of the Day, Tech Tip No Comments
Have you ever sat in a compressor review meeting where I’ve explained to the group that opening pockets reduces the appetite of a compressor cylinder, and then 10 minutes later, I’m telling you that opening your pockets will get your more production? If the answer is yes, I swear, I’m not an idiot and hopefully I can walk everyone through why it is possible to open up pockets and achieve a higher flow rate. One specific situation that I’ll focus in on is when you bring on a new well, and your suction control valve has to pinch back, limiting the amount of gas getting to your 1st stage. Before looking at a curve, let’s consider how horsepower (HP) changes as a result of Compression Ratio (CR) changes, and flow rate. Here are the relationships: In addition to looking at how HP changes with CR and Flow, another relationship worth summarizing is the relationship between clearance inside the cylinder, suction pressure, and cylinder flow: So with that, let’s look at what happens when you add clearance to a cylinder when you add clearance by opening up a variable volume clearance pocket (VVCP), while keeping flow rates the same:

Because the HP required to move that fixed amount of gas has decreased, you can now bring more gas on by opening up your suction control valve, or turning on another well until your engine hits Max HP again. On the curve below, if you were operating at point 3, you would be moving 11mmscfd at a suction pressure of 115psig, utilizing Max HP.

Now your production engineer lets you know that they need this compressor to move an additional 1mmscfd, putting your new flow rate at 12mmscfd. The numbered steps that follow will correspond to the number points on the curve below: 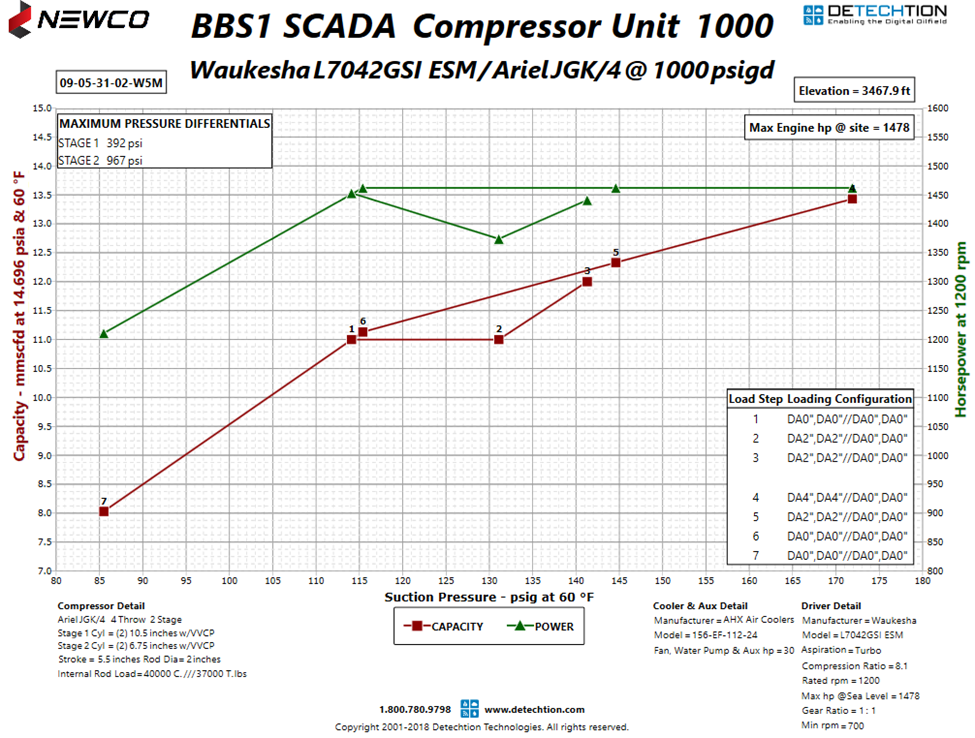 So with that, hopefully it’s a little more clear how we can manipulate a cylinder’s appetite by adding clearance, to unload the engine, and then re-load the engine again by bringing on some more gas!

Detechtion Technologies is the market leading Industrial IoT and mobile application provider enabling the digital oilfield. Through its Enalysis®, Enbase® and Fieldlink™ product lines, Detechtion® offers solutions for chemical injection, compression, and other production operations. Using Detechtion’s Monitor, Protect, Control, Optimize™ paradigm customers are able to automate assets with a single hardware device. Over 200 customers and thousands of users depend on Detechtion Technologies to monitor and manage over 10,000 assets worldwide.